At the outset EPV may give an impression that it uses a too simplistic approach to value stocks.

But when I went into its calculations, its phenomenally detailed and good.

I was really impressed with the person who developed such a concept.

Who is Bruce Greenwald?

He has a Bachelor Degree in Electrical Engineering from MIT (1967).

Bruce did his Masters in Electrical Engineering from Princeton University (1969).

He completed his Phd in Economics from MIT (1978).

Since 1991, he is working in Columbia Business School as a Professor.

Here he is also a Director of “Heilbrunn Center for Graham & Dodd Investing” (this is a place where Warren Buffett gives lectures).

This course is only for the Columbia Business School first-year students.

So, when a person of the stature of Bruce Greenwald develops a stock valuation model, it must be something out of the box.

So lets see what is EPV

I am personally a big fan of Discounted Cash Flow (DCF) model of intrinsic value calculation.

But people who love EPV says that DCF is a more speculative way to estimate intrinsic value. Why?

Because DCF tries to forecast “future” free cash flows of the company by assuming a future growth rate.

But Earning Power Value is a more methodical approach which eliminates any “guess work”.

Intrinsic value estimation using EPV is done purely on basis of the ability of company to generate consistent profits (EBIT) from its operations.

It means, we are valuing a company assuming that it will do just enough to sustain its profit levels.

Means same profit will continue to yield year after year in future. But profit growth will be zero.

For a big company like RIL, Coal India, ONGC, TCS etc even maintaining the current market share is a huge challenge.

So do not get too bothered about that zero growth thing.

Generally companies does business to generate profits, and also to grow in future.

But in EPV approach, the future growth portion is not considered for evaluation.

Instead, more emphasis is given on maintaining the current profit levels.

How a company can maintain current profit levels?

This is done by ensuring just sufficient Capital Expenditure (CAPEX) investment back into the operation.

Capital expenditure is done for the following two purposes:

Inside the Modernisation Capex, there can be again two parts:

In Earning Power Value (EPV) calculation, we will deal only with Maintenance Capex (as focus is more on sustaining the current profit levels).

But companies do not declare how much they are spending on Maintenance Capex, so how to get this value?

There is a nice way, we will see it when we read the detailed steps involved in EPV.

Though Earning Power Value (EPV) is not a perfect valuation model, but it justifies itself well. How?

The approach of EPV to arrive at a potential intrinsic value of a company is extremely logical.

When we will see the steps involved in EPV calculation, you too will appreciate this aspect of EPV.

Where DCF scores above EPV?

But in EPV calculation we rely on EBIT.

Cash flow represents real money that gets credited into the companies bank accounts.

But EBIT is just a representation of future profit.

A company which is showing EBIT of say Rs.900 crores (in Mar’17 reports), may not have received all Rs.900 crore from its customers.

So what is the problem with EBIT?

If something goes wrong, company may not receive the money from its customers. It means, EBIT does not convert into real cash flow.

But not receiving money from customers happens rarely.

It is not uncommon for companies to receive the due payments from customers very delayed.

In such cases, though companies financial reports are showing healthy EBIT, but if this money never arrives the company on time, its a problem.

This is where DCF score above EPV.

But never mind, good companies always find a way to recover their stuck EBIT from customers.

This is where strong Management Team comes to work.

In calculation of EPV, knowing a companies EBIT margin is essential. But we will not deal only with one year margins.

We will consider an average of last 5 years. Why?

Because in some years, companies margin is better. While in other it is lower.

We would not like to pick a too-high or a too-low margins.

A better approach will be to consider a average margin for a complete business cycle.

With respect to a company, a time horizon of 5 years is a sufficiently long period to include all business cycles (high, low, moderate all).

This is how my stock analysis worksheet computes the average EBIT margin of stocks:

In calculation of EBIT, we will not consider only one year’s EBIT. Instead, we will use normalised EBIT.

What is normalised EBIT?

A part of SG&A expense goes to maintain the existing sales, balance is used to grow future sales.

[P.Note: In EPV we are dealing only with maintaining the existing profits.]

Proportion of SG&A used to maintain existing sales, and to grow future sales varies between company to company.

But for the sake of simplicity my stock analysis worksheet assumes it to be 50-50.

What is maintenance Capex?

It is the Capital Expenditure incurred by the company to maintain its current profit levels.

There are no standard ways to calculate Maintenance Capex.

So what we use is the following logic:

Average value of all Maintenance Incurred by the company in last 5 years is AM.Capex.

WACC is the weighted average cost of Capital.

If EPV per share of a stock is more than its current market price, it means the stock is undervalued.

If EPV per share of a stock is less than its current market price, it means the stock is overvalued.

Here I would like to repeat this fact that Earning Power Value (EPV) uses the current situation of companies finances to value it.

So it is only prudent to assume that, EPV will value growth stocks much lesser.

DCF model is much better option for valuation of growth stocks.

This must also be understood that, if a company does not maintain its current profit levels in future, the EPV model will estimate its intrinsic value much higher. 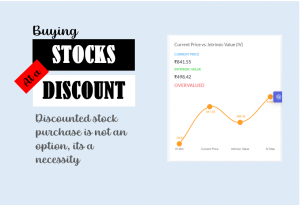 Buying Stocks At A Discount: Is It A Necessity Or An Option?

The focus on buying stocks at a discount has unparalleled benefits. It is especially true 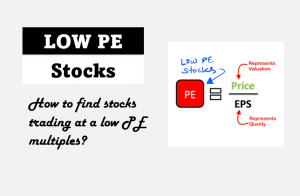