What is the way we can generate compounding investment returns?

To do this we will have to understanding the power of compounding first.

Before one starts to invest money, it is important to appreciate the power of compounding.

It is the power of compounding that can generates larger cumulative returns over a period of time.

In long term investing, the power of compounding plays a major role.

What makes the power of compounding so important for long term investors?

The power of compounding is a theory which helps the invested money to multiply geometrically if held for a long term.

The speed at which the money multiplies depends on two factors: first is the rate of return and, second is the holding period.

A combination of investment returns and holding periods gives varied results like exemplified below:

From the above chart a pattern is very evident.

“The speed of compounding of investment returns become faster in later years”.

Another observation is easy to conclude.

The speed of compounding of investment returns are faster when the rate of returns are higher.

This observation also lead the experts to derive a very convenient investment rule that will help us to understand the power of compounding even more clearly.

This is called the rule of 72.

Rule says that the money doubles when the product of the rate of return and time horizon is equal to 72. 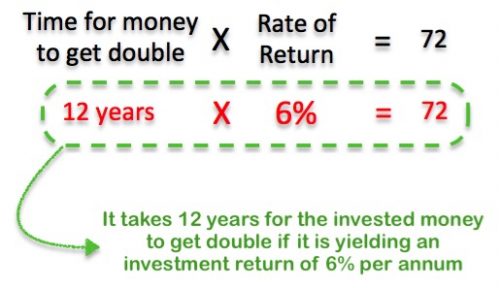 So what does this rule tells us about the compounding investment returns?

Let’s understand this with an example.

Suppose your investment got doubled in a period of 4 years.

Now we know what a power of compounding can do to our invested money.

At the rate of 15% per annum, our invested money will double every 4.8 years.

It means, if you invested Rs. 1 Lakh today yielding 15% return, after 29 years the same money with inflate and become Rs.64 lakhs.

This is the what is the real power of compounding.

But aren’t we suppose to talk also about time value of money?

But what happens if the money was not invested?

The answer is simple, either the money gets spent or it continues to be Rs.1 lakhs even after 29 years.

This requirement to grow money by putting it into suitable investment option is not only a wilful desire, it is a necessity as well.

Remember, investment is a necessity, it is not an option.

It is absolutely necessary that money keeps yielding compounding investment returns over and over again.

There is a theory which says:

In other words, the money becomes weaker with passing years.

To understand this, lets take another example.

Suppose there are two friends, Jack and Sam.

Both of them are 25 years of age and has $10 million dollar in their bank account.

The money in bank for both of them is so huge that they need not bother about investing, right?

Sure, at least this is the way majority people will think if they have $10 million in kitty.

People who does not know the necessity of investing money do become complacent with their income/savings.

But this is a big mistake.

As investment was not a priority for Jack and Sam, Jack decided to park his $5 million in a debt linked mutual fund for next 10 years.

Balance $5 million he kept with himself to maintain his standard of living.

But Sam decided to continue a care free and lavish lifestyle. He kept with himself the full $10 million to support his standard of living.

So what change these two different approach to investing will bring to Jack’s and Sam’s lifestyle?

At the end of 10th year, Jack spent his $5 million but he also had another Rs.10 million dollar in his investment portfolio.

But as Sam did not invest, what remained with him was only $5 million.

So what Jack and Sam had with them after 10 years? 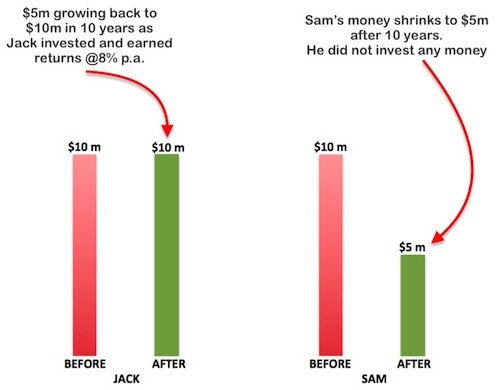 Now, as Sam’s net worth is half of Jack.

What Jack can do in next 10 years, Sam cannot do the same.

It means, for the next years, Sam will not be able to afford the same lifestyle as that of Jack.

Till today, both of them has spent $5 million on themselves. Jack can afford to do the same for next 10 years again.

But for Sam, he cannot afford to spend as lavishly as Jack.

So what does this mean?

By not investing his money, Sam has actually harmed his power of spending.

This is why it is said that, investing money is a necessity, it is not an option.

It makes out money weaker with every passing year.

I am talking about inflation.

It is the compounding investment returns that come as our savior from the wrath of inflation.

A suitably invested money will grow at a fast rate so as to beat the negative effects of inflation.

How to calculate the ‘future value’ or ‘present value’ of money by a mathematical formula?

Most of us have learnt the Compound Interest as part of our mathematics curriculum in school.

They same formula can be used to calculate the present value and future value of our money.

This formula can be used to calculate future and present value of our investments.

This formula can also be used to calculate present value of future cash flows.

The concept of present value is often used in value investing to estimate intrinsic value of companies.

To understand how we can use the concept of present value, lets take an oversimplified hypothetical example.

Suppose you are approached by your LIC agent who wants to sell you an ULIP. This plan will cost you $1,000 today.

How you can decide if this is good investment or not?

You can use the compound interest formula to draw your conclusion.

The return are not very high but at least it is not eating away your money (inflation).

Suppose you are approached by a broker who wants to sell you a residential property during its project launch stage.

How you can decide if this is good investment or not?

Again, you can use the above compound interest formula.

Means, in today’s terms, this investment is adding an additional $4,832 to your pocket.

This return is good.

This return is good (much more than 7.5% p.a.). The return is high. It beats inflation by a big margin.

Using rule of 72, this mutual fund doubles the money every 4 years.

Using rule of 72, this mutual fund doubles the money every 3 years, 4 months years.

Using rule of 72, this mutual fund doubles the money every 2 years, 8 months years.

Using rule of 72, this mutual fund doubles the money every 3 years, 9 months years.

Generally, we invest money in two forms. First is in lump-sum, like a one-time investment. We also invest systematically, small-small amounts each month. How to measure return on investment (ROI) in each case? We all […]

[Updated: 16-Jan-2021] In this blog post you will see a list of stocks that gave the highest return in the last 10 years here. But what is interesting about my list of stocks is the […]

I have already written an article on Systematic Investment Plan (SIP). So why a separate post on SIP return calculator? Writing a separate post was necessary to explain a very important point about returns from SIP. To […]