Why do we pay taxes?

The tax paid by us becomes a receipt (income) for the government of India. They use the receipts to fund essential expenses like defence, police, judiciary, public health, infrastructure etc. But you will be surprised to note that almost one quarter (23.31%) of the total government expense is spent on interest payments alone.

To understand how our tax money is used by the government, we will have to first understand what is union budget.

It is in the annual union budget that the incumbent government declares all its expenses at great length. But union budget is not only about expenses. The government also declares its receipts (incomes).

Like companies declare their income & expenses in P&L Accounts, government declares it in its union budget.

In the budget, the government announces where it is going to spend the money in coming fiscal, and what will be its source of revenue (receipts).

In Union Budget, Government of India (GOI) declares the total revenue foreseen in the coming fiscal year. There are three types of revenue receipts of GOI: (a) Tax Receipts, (b) Non-tax receipts, and (c) Capital receipts.

What does the above chart represent?

GOI not only generates cash from tax collection (53.77%), but there are other sources of revenue: viz capital receipts (33.57%) and non-tax revenue (12.66%). The income tax, corporation tax, GST, customs, etc that we pay to government comes under the head of “Tax Revenue”.

So it is not that we (Indian residents) pays for all expenses of the nation. Capital receipts (recovery of loans, disinvestment, debt etc) and non-tax revenue (dividends, interests etc) also contributes (about 46.23%) to the total receipts.

If we will dig further down into the revenue break-up, we will get more compelling facts:

Debt Receipts Break-up is shown below:

Out of total debt of the government of India (Rs.7.96 Lakh Crore), following are its major components:

In Union Budget, Government of India (GOI) declares the total expenditure foreseen in the coming fiscal year. The whole government expenditure can be divided into two categories, Revenue and Capital expenditure.

What is fiscal deficit? It is the deficit between governments revenue (receipts) and expenditure. If a government’s revenue is lower than its actual/budgeted expenses, this is a condition of fiscal deficit.

To calculate fiscal deficit, we can use the following formula:

Ideally speaking, there should be no fiscal deficit for any economy. But for growing economies like India, where capital expense requirement is huge, a slight fiscal deficit is like unavoidable.

To make up for this fiscal deficit, Government borrows money. Controlled borrowing is not bad if it is done to fund the country’s capital expenditures. Why? Because these capital expenses will create asset, which in turn will make the country more efficient. This way the nation will generate more revenue (tax and non-tax) for the government in times to come.

What will happen if we will not pay tax? Revenue of the government will fall and fiscal deficit will increase.

2. Does Everyone Pays Tax?

Yes, everyone pays tax, it is unavoidable. There are two types of tax collected by government of India.

Avoiding indirect tax is impossible. We have to pay indirect taxs on purchase of any goods or services. When we buy groceries, GST is included in its price. When we get our fridge repaired, GST is charged. .

But it is possible to avoid direct tax. Depending on ones tax slabs and allowable deduction few people pay tax and some don’t. It is perfectly legal.

Paying taxes is an obligation. But it does not mean that tax is a bad thing. The cumulative tax that we all pay to our government is in turn used to make our nation better.

All this was not possible had all earning members of the country has not contributed their bit in nation building. Payment of tax is our way of contribution for a stronger India in times to come.

If you want start your expense tracking from today, you’ve landed on a right page. Here not only you will learn about expense tracking, but you can also download a tool to start doing it […]

How to Manage Your Money? Quick Tips on Personal Finance 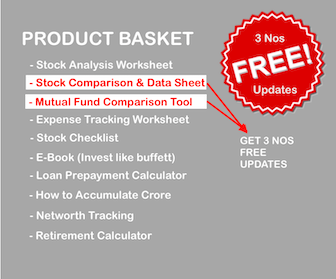